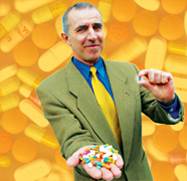 Pharmaceutical companies can make as much as a billion dollars or more on a hot drug they have under patent, but their patents only last 20 years. Once that time period expires the generic drug makers move in, everyone lawyers up to extend the feeding trough for a few years, but eventually generic versions of the drug hit the market and the price drops to almost zero. After that, drug companies move on to the next potential blockbuster.

One strategy is to come up with a new version of their drug and get a patent on that, and then try and convince everyone that it is a better drug than the earlier version. In 2008 Merck and Schering-Plough were working to come up with a new version of their cholesterol lowering drugs. They came up with a drug called Vytorin that combined Zetia (ezetimibe) with the statin Zocor (simvastatin). Unfortunately, a clinical trial showed that Vytorin does not prevent the development of atherosclerotic plaque better than Zocor alone. If anything its worse. In spite of the fact that Vytorin reduced cholesterol to lower levels than Zocor, it wasn’t better at preventing heart attacks and strokes.


It didn’t take long after that for a statement from the American Heart Association (AHA) to come sliding through the fax machine at the Emory Department of Cardiology stating that lowering cholesterol is good and that patients should not stop taking their medicines. The obvious conflict of interest that AHA was getting a million dollars a year from Merck and Schering-Plough was quickly pointed out… but denied all around. They followed up with daily full page ads in the New York Times telling people not to stop taking their Vytorin (I sing the ads in my head to the tune of the song by Journey “Don’t stop believing, hang on to that feeling”).

Scientists have known for years that LDL cholesterol reduction isn’t the only game in town when it comes to preventing heart attacks. Statins probably prevent heart attacks in other ways besides lowering cholesterol, and decreasing your cholesterol level doesn’t necessarily prevent a heart attack. But the cholesterol numbers game is great for marketing, especially when you can sell a drug like Vytorin to patients who didn’t get their cholesterol down with a statin alone. And Vytorin costs over two dollars a pill while simvastatin costs less than a dollar. But what was most disturbing about this morality play is that the manufacturers, Merck and Schering-Plough, delayed publicizing the study results for almost two years. That was worth a couple of billion dollars of sales that they wouldn’t have gotten if doctors and patients knew how useless Vytorin was compared to the much cheaper generic statins.

An article article in The New York Times raised this issue and asked, is lowering cholesterol really the key to heart attack prevention? The article was written as if no one had ever considered the question before. And yet it was only the previous year that Pfizer’s drug, Torcetrapib, which lowers “bad” LDL cholesterol and raises “good” HDL cholesterol, was shown to actually increase the risk of fatal heart attacks. For years scientists in the cardiology field have known that cholesterol lowering is not the only mechanism by which statin drugs work to prevent heart attacks. They act on inflammatory pathways and by other means that are not fully understood. Why has this news been slow to disseminate to the public? Since half of Americans over age 35 have an LDL cholesterol that is in the elevated range, and since these drugs definitely lower LDL cholesterol, it is easier to sell them on that basis. In fact, Zetia got approved solely on the basis of its ability to get LDL levels down. The FDA didn’t require the manufacturer to prove that it did what we want it to do, that is prevent heart attacks.
And before we get too excited about generic simvastatin, consider how many people with multiple risk factors need to be treated for five years to save one from a heart attack. About 250. That means a risk of heart attack reduction of about 0.2%. And with the risk of muscle pain that doesn’t go away right away, cognitive impairment, and other possible problems. Put that stuff in your own damn drinking water.

Here is another example game of the numbers game run amuck: bone mineral density (BMD) testing. BMD testing is used to screen for osteoporosis, and drugs like Fosamax can certainly drive up BMD. The FDA approves drugs for osteoporosis based on their ability to increase bone mineral density (BMD), not based on their ability to do what we want, which is prevent fractures. Since half of women in their 70s meet criteria for osteoporosis, focusing on screening and treatment of BMD spurs drug sales. However, the increase in BMD as a result of most of these drugs is not necessarily in the part of the bone that matters. For example, one of the drugs the FDA approved, Miacalcin (calcitonin), has no positive effect on fractures.

The point is that the focus on the cholesterol and BMD number adds to the confusion of healthcare consumers and presents a distorted view of the safety and efficacy of medications. Marketing gone wild has led to a situation where half of Americans take prescription medications, and at 100,000 per year the number of deaths from prescription dwarfs those from street drugs.


A big problem has been the use of expert guidelines. Drug companies organize conferences and meetings and pay for travel and honoraria to have the leaders in a particular field come together and write guidelines for treatments. It isn’t a coincidence that these same doctors are also often getting paid to be on the advisory boards and to give lectures on behalf of these same drug companies. After, they are the experts, right? It also is not a coincidence that the guidelines tend to lean towards more extensive use of medication. If you compare the US guidelines to those written in any other country in the world, if followed they would result in twice as many people taking statin medications, or in other words about half of middle-aged and older men. And that’s just for situations where they might work. The guidelines also recommend statins for women with elevated cholesterol even if they don’t have a history of heart disease or other risk factors. In this case, the studies have shown that they don’t decrease the risk of heart attacks. So what’s the point of taking them? None. That hasn’t stopped doctors from prescribing them to tens of thousands of women. The steady drum beat in the media of “heart disease is under-recognized in women” makes feel like we are sexist or unpatriotic if we don’t use them.

Often the distortions associated with how well a drug works results from the fact that the clinical trial study data is never published. For example, analysis of data from studies of 12 antidepressant medications showed that data from 37 of 38 clinical trials that were viewed as having positive results by the FDA were published in medical journals. Out of 36 trials viewed by the FDA as negative, 22 were not published, and 11 were published in a way that made their outcome look positive (even though the FDA didn’t think it was). This means that if you look at the medical literature, you would think that 94% of the studies show that antidepressants work, when in fact only 51% were positive.

Some will argue that it is difficult to get studies published with negative results, or that people don’t get as excited about them. The implication is that negative studies are not as important as positive studies, but that simply isn’t true. We need all of the data related to drugs, not a selective sampling that presents a biases picture. And the fact is that you can always find a journal to publish negative results from large, important studies such as those reported on here. Holding back a negative study results creates a biased view of the efficacy of a drug, so that doctors, and thus the public, don’t have a good idea about how well it really works. Spinning the numbers, whether it’s the cholesterol or BMD numbers game, is not in the interest of healthcare consumers.